Invite Share : Inviteshare - How to Get Invites to Closed Sites

These days when it comes to Web 2.0 beta launches, sites don't just launch their products and services to the masses anymore. Remember when Google Analytics beta came out? Maybe you don't, but I was one of the 'exclusive' to try it out a long time before it became available to the masses.

In fact I've been lucky enough to be in early on a lot of betas. It makes sense too, these sites and products create extra marketing buzz for themselves, while also getting their products and services effectively tested. By the time they officially launch, thousands, if not millions, of people want their products. Much better than just, wham, here it is.. use it.

Quite often when invite only betas are going around, invitees are given a few extra invite tokens that they can give out and that's where InviteShare comes in. InviteShare has built an exchange for them. 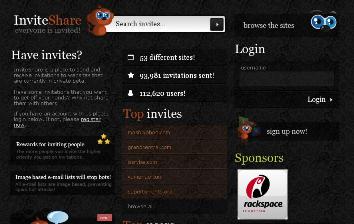 For instance, if you want an invite to a service, such as Joost or Freebase, you can put your name on the list and then if someone has spare passes, they may give you one.

Not all the exclusive web 2.0 sites are in there, but there are a lot and this service has been growing at a frantic rate (2-4k Alexa over the past week).

All in all to summarize, InviteShare allows people to give and get invites to closed sites. Will it be the next web 2.0 hit to follow Myspace, Digg, YouTube and others? Maybe not that big, but time will tell.

Reply
What a cool idea for a site.

I'm always the last to know about these things, here's hoping that won't be the case any more!

Get 120+ free lessons, and discover how to build your own passive 6-figure income!

To watch our full-length video lessons, you need to be an Affilorama member. It's free, and just takes a minute to join.